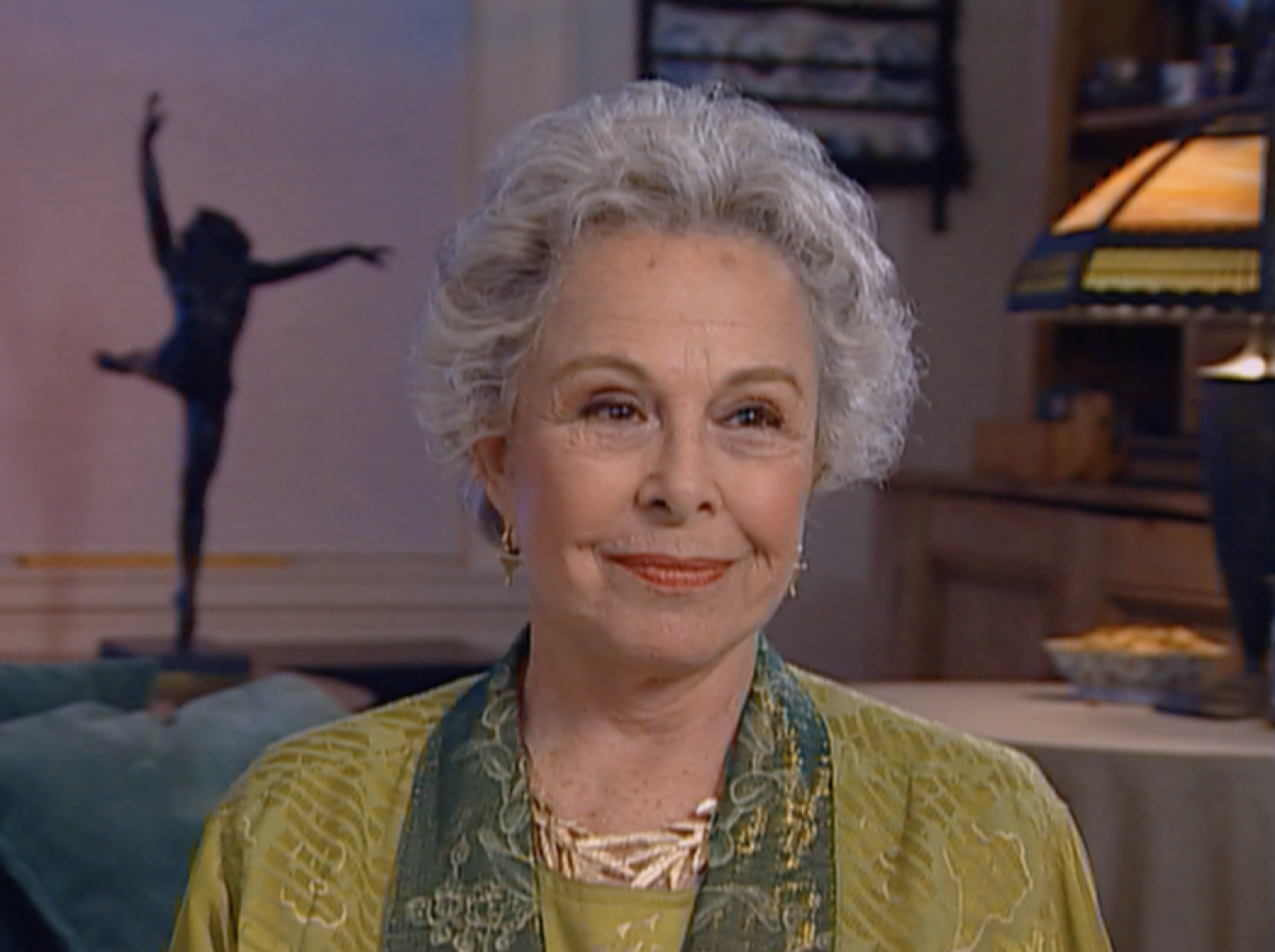 We’re sad to learn that dancer/choreographer Marge Champion has passed away at the age of 101. The daughter of choreographer Ernest Belcher, she began studying dance when she was a small child, and when she was a teenager, served as the motion model for Disney’s "Snow White". Along with her husband, Gower Champion, she choreographed and danced on television, including on many shows in the 1950s like Admiral Broadway Revue, Your Show of Shows, and The Ed Sullivan Show, as well as their own show The Marge and Gower Champion Show. She won an Emmy Award for choreographing Queen of the Stardust Ballroom in 1975.

Below are some selections from her 1998 interview:

On her early memories of performing in her father’s ballets:

The first time I really remember performing was in a ballet of my father's at the Hollywood Bowl. He put on ballets at the Hollywood Bowl almost every year, and this was in the early '30s. And I did just a slight little solo called the Spirit of the Night. And I think it was in the next year that Gwen Verdon and her mother were in my father's ballet, which was called Carnival in Venice. And she was seven. So, she always tells this story which I think is hilarious. It was kind of a comedia del arte thing, and she had, she was this little clown-like character, and she had a little poodle on a leash. And her mother, of course, was also a clown-like character, and they moved around throughout the ballet. Well, at the rehearsal -- it's very hot at, or it was then, at the Hollywood Bowl during the afternoons, and the dog got deathly ill. It threw up and did all this stuff. So, my father said we had to get the dog out of there, and she remembers my father's chief assistant coming and stripping her down to her leotard and suddenly pasting these pompoms all over her leotard and putting the little collar on her. So she made her debut at the Hollywood Bowl as a poodle.

On being the motion model for “Snow White”:

I worked maybe one or two days a month for the magnificent sum of ten dollars a day. I worked for two years, on and off, on this. And I got so that I knew -- that I got very free with it. I mean, if they said, "Uh, well, we're doing this scene now, this whole section where she's running through the forest and the branches of the trees are sort of clutching at her," and they had a clothesline just, you know, strung up, and they had all these big cords hanging down so that I'd have to brush them aside to get into. They helped me some so that I didn't have to just pantomime everything.

On performing on early television:

I think we usually had two [cameras]. It was principally one camera, but everything Gower designed, that's why we were able to go into films and work out so much. Because everything he designed had a camera point of view, and he always thought filmically. [Television] had more spontaneity than films because you didn't have the opportunity to get so perfect. And if you did, you know, louse up in one direction or another, you had to figure out something to get you out of it just the way you do onstage. But, I guess when you're young and you don't know, really, how important it is or what -- well, it was mostly youthfulness. As you get older, you get more and more cautious and more and more afraid, especially if you've been successful. And that's too bad because some of the spontaneity does go out of it. Then you're just thrilled to be on film so that every department can make you perfect. Well, that has its good points and its bad points. I loved having somebody else think about my costumes and think about my, my hair. I mean, I don't remember having a hairdresser or a makeup man all the years we were in clubs. I never had one.

On advice for aspiring dancers:

Well, first of all I tell them that they better examine how much they want it, because it is the toughest, it is the least rewarding most of the time, and you end up with a lot of injuries. So unless they really want it, I mean, almost like a call, I would suggest that they dance for pleasure but don't try to go into the business. Choreography has become so busy and so complicated that the dance injuries are tripling every other year. And it has to do, again, with this feeling that everybody has to cram everything they've ever known into every show to make it work. You have to put more steps into four bars than the human body should be asked to endure. And so that it’s a real call. I mean, if you can't help but be a priest, then be a priest. But don't go into it if there's something else you think you'd rather do. I mean, that was true even in our day, because you can be the really best trained dancer in the world, and you can go knock on doors. If you don't happen to have the right figure or the right face or the right something that somebody is looking for, you can't get to first base and you certainly can't build up any equity. Unless your family is very rich and you just keep taking from them.

Watch Marge Champion’s full interview and read her obituary in the Hollywood Reporter.