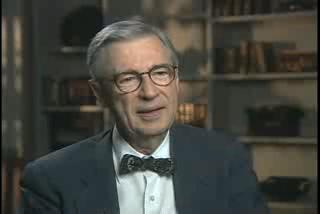 Congratulations to the winners of the Fred Rogers Memorial Scholarship presented at Saturday's 33rd Annual Daytime Creative Arts Emmy Awards (see the press release below for details). In 1999, the Academy of Television Arts & Sciences Foundation's Archive of American Television interviewed Mr. Rogers in-depth about his entire television career. Watch this amazing interview (and look for a few cameos by some of his favorite puppets) and see why he continues to be an inspiration to so many.

In his 4-1/2 hour interview, Fred Rogers described his work as the creator and host of Mister Rogers’ Neighborhood, which began its run in 1968. He described the show’s evolution, which started with Misterogers which he produced in Canada for the CBC. He described each aspect of the show including the origin of his trademark sweaters. He described his early years in television working as a floor manager for NBC on such shows as NBC Opera Theatre, The Kate Smith Hour, and The Gabby Hayes Show. He detailed his move into public television in 1953 with his work as the program director for WQED, Pittsburgh. He described his first children’s program The Children’s Corner (1954-61 WQED; 1955-56 NBC), which introduced several puppets later used on Mister Rogers. He talked about the importance of children’s programming and his longevity as a childrens’ show host. The interview was conducted on July 22, 1999 by Karen Herman in Pittsburgh, PA.

Graduate Students to Each Receive $10,000
for Their Work in Children’s Media

NORTH HOLLYWOOD, CA. April 21, 2006 – The Academy of Television Arts & Sciences Foundation along with Ernst & Young LLP jointly announced that Nathalie Carrick and Nicholas Deysher are the recipients of the second Fred Rogers Memorial Scholarship. The announcement was made by Nancy Steingard and Vicki Ariyasu, Governors of the Television Academy's Children's Programming Peer Group and Andy Sale, Ernst & Young’s Media and Entertainment Leader for the Pacific Southwest Area.

The scholarships will be presented to the students at the 33rd Annual Daytime Creative Arts Emmy Awards on Saturday, April 22 in Los Angeles by Daytime Emmy® nominee, J.D. Roth (“Endurance: Tehachapi"). Carrick, who is currently pursuing a Ph.D. in Developmental Psychology at the UC Irvine, will be given the Research Scholarship. Deysher, a grad student in the University of Miami’s Media Writing and Production program, will be given the Production Scholarship. Each will receive $10,000 to support their aspiring careers in children's media and furthering the values and principles of Rogers' work. In addition to the monetary award, both will be assigned a mentor from the Television Academy's Children's Programming Group who will work with them during the academic year.

"Both Nathalie and Nicholas are students that devote their time to the field of children's media and we are thrilled to be able to award these scholarships to them,” said Steingard. “They have both demonstrated a commitment to programming that reflects the values, creativity and spirit of Fred Rogers."

Added Ariyasu, "We couldn't ask for two better recipients to be emissaries of Fred Rogers and the Television Academy. Nathalie and Nicholas are both sincere and passionate about children's media and their work truly best represents Rogers' vision of using television to enlighten and inspire young children."

“Ernst & Young is proud to underwrite this unique scholarship program,” commented Andy Sale, Ernst & Young’s Media and Entertainment Leader for the Pacific Southwest Area. “We share a commitment to promoting quality education and hope this scholarship encourages others to pursue a career in educational programming for children.” ....