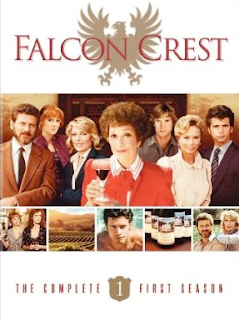 Falcon Crest joins Dallas, Dynasty, and Knots Landing on DVD today-- the last of the long-running '80s prime time soaps to make the jump to home video. The series ran from 1981-1990, and starred Oscar-winning screen star Jane Wyman as villainess "Angela Channing," in her last major role, for which she won the Golden Globe. Wyman was no stranger to TV though, and, in fact, was a two-time Emmy nominee for her work on the classic anthology series Fireside Theatre (aka The Jane Wyman Show) in the 1950s.

Reviewing the sixth season's opener, Variety noted "the costumers, art director John P. Bruce and director of photography Ken Peach Jr. have conspired to give the series a glossy, elegant look." Harry and Wally's Favorite TV Shows acknowledges that all of the necessary soap elements are found on Falcon Crest, "incalculable wealth, an evil villain, good-looking young people, and sexual intrigue" yet in comparing it to Dallas and Dynasty comments that the show failed to achieve cult status because it was "too realistic" and didn't provide "what prime-time soap fans crave... opulence and exaggerated characters." That's up for debate!

. They’d just been married and they’d both led rather dissolute lives; and after the minister says, 'I now pronounce you man and wife,' she turns to him and says, 'I’m pregnant.' And he says, 'Oh?' And she says, 'but it’s not yours.' I mean, that’s a key to the wickedness that we did."

Earl Hamner outlines the creation of Falcon Crest and gives his impressions of the show's stars in Part 7 (see timecode 2:20) of his Archive of American Television interview.]