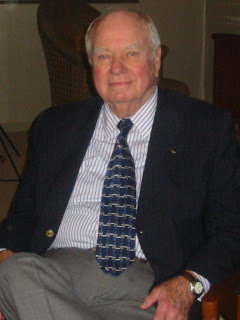 Here are some excerpts from his interview:

On ABC’s Wide World of Sports.
I believe the first Wide World of Sports event was a Drake Relay and it was terrible. It was a very inexpensive sports program cause we paid very little for rights to anything. But it began to pick up when we saw it had a combination in February of that year of skiing in New Hampshire, and water surfing in Hawaii in the same show. And then we got a big rating on that and it took off.

On bringing The Flintstones to television.
John Mitchell was head of Screen Gems, which was totally owned by Columbia Pictures. John was a terrific salesman. They made a deal with a pair of guys Bill Hanna and Joe Barbera. They called us and said, “We would like to show you something and Joe Barbera will be there.”….We went up there and the room is completely filled with storyboard. Joe Barbera started in one corner at the top and went around the room and performed the whole pilot and it was a rip-off almost entirely of Honeymooners. The characters, the relationships, the whole damn thing -- it was just Honeymooners all over again. If you can believe it, we agreed to that thing. Now, the commitment on animation is a long time and you have to make it way ahead. We committed to it for next year, eight thirty on Friday night.

On The Autobiography of Miss Jane Pittman.
There was this book called The Autobiography of Miss Jane Pitman, by Ernest Gaines and we’d, we bought an option on it. ABC gave us the money to do the script. The script was done by Tracy Keenan Wynn whom I had never heard of then, except he was a grandson of Ed Wynn and his father was Keenan Wynn, and Tracy wrote a script that I thought was just the best doggone thing that I’d ever seen. I got to work and was casting the thing when ABC’s Barry Diller, told me it’s fraught with too many dangers and we’re not going to make it. I took it to Bobby Wood at CBS who in the meantime had hired Freddy Silverman as the Head of Programming and Freddy was as enthusiastic about it as I was and CBS cast Cicely Tyson and she was magnificent in it. We made that picture for $1.2 million dollars, and I tried to talk Bobby into letting me go to two hours and a half. Freddy wanted to but Bob didn’t want to; that messed up his schedule. But it, it won great acclaim, it is now still a classic in that it is shown at schools and colleges and everywhere else.

Moore was interviewed by the Archive of American Television in January of 2003.

The complete five-and-a-half hour interview, in which he discusses his long and distinguished career, can be viewed at Academy Headquarters in North Hollywood, CA.