The Archive's Dan Rather Interview featured in Emmy Magazine 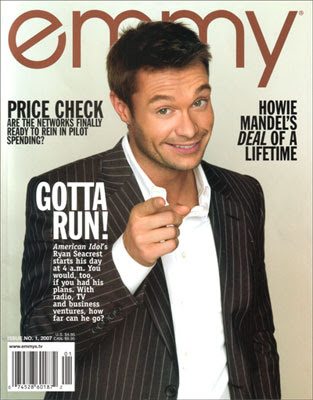 The latest issue of Emmy magazine (Issue No. 1, 2007, with Ryan Seacrest on the cover) includes selections from our Archive of American Television interview with Dan Rather. He was interviewed in 2005 in two sessions totalling 8 hours. Here are some excerpts from the article:

Q: When did you know you wanted to be a journalist?
I cannot remember a time when I did not want to be a reporter. I think the reason for that was my father’s tremendous interest in newspapers; and to a degree, my mother’s. But who knows where the wellsprings are? This I know: from a very early age, I said I wanted to be a reporter. In that, I’ve been very lucky. There are very few people who get to live their dream.

CBS News president Bill Leonard, said, “We haven’t made it public, but we’ve been talking with Walter and he’s trying to figure out when he wants to go. We’re going to make this change pretty soon at Walter’s request.” CBS then said, We want to keep you. Would you be willing to do a dual anchor with Roger Mudd? You in New York and Roger in Washington."

I said yes. Not only did I not have any problem with that, but I can see some advantages, which might allow me to report from the outside. Bill Leonard then went to Washington and when he came back, he said, “The dual anchor is not going to work. Walter wants to retire in 1981; we will make the retirement in March of 1981.” I went to talk with Walter at his home to make sure he was okay with it. I signed the contract Valentine’s Day 1980 to be Walter Cronkite’s successor. Nobody replaces Walter Cronkite.

Other topics covered in the article include:
- His early work at KHOU in Houston

- Covering Hurricane Carla, which brought him to the attention of CBS News
- Covering the Civil Rights Movement
- Seeing the Zapruder film of President Kennedy's assassination for the first time
- Covering the Vietnam War
- His interaction with President Nixon
- Interviewing Saddam Hussein
- Retiring from CBS Evening News

You can find the issue at some newsstands, or it can be ordered through the Emmy Magazine Webpage.