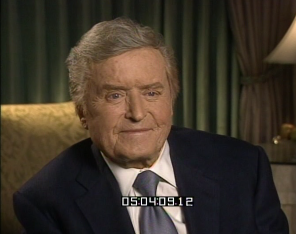 Legendary talk show host Mike Douglas died today on his 81st birthday. The Archive of American Television interviewed him about his life and career for three hours in 2005. Below are some excerpts from that interview:

On voicing Prince Charming in the Disney feature, Cinderella.
I probably was in dire need of a job and an income. Suddenly, this agent called me, and he said – they’ve auditioned 500 people at Disney, and I got you an appointment. Disney himself is there listening. I walk in and I couldn’t see. It’s one of those glasses you can’t see the people through, but you know there’s somebody in there, he was in there. I sang “So This is Love.” He turned and said, ‘that’s him, that’s what I want. I want that voice.’ I just came out of the service. We had this little GI house, we had some furniture. We had twin babies. They paid me $100 a day. We needed it so desperately. The very beginning of our life and our first little home and all.

On finding the energy to tape multiple Mike Douglas Shows in one day.
We had two double tape days. Do you know what it’s like doing two 90-minute shows in one day? Just think about the preparation. I had the energy. I cannot tell you why. I think the show gave me the energy. I was 36 years old when I got the show. I used to work with a guy who’d say, ‘if you haven’t made it by the time you’re 35, forget it.’ That stayed in my mind. I just got in under the wire. I was so grateful. I put my entire being into that show. I worked harder than any of them did…. The trick is, making it look easy.

On what makes a great interview.
Liking the person makes it a lot easier. You don’t like everybody you talk to and some of them don’t like me. It’s easy to overcome that, if you know that going in. I did it for so long, your instincts become very important. Also, the chemistry, I feel the chemistry. I can tell you before a show, seeing the people who are booked, that it’s not going to work. The chemistry’s not right. It was tough to deal with, I want to tell you, because they’re already booked, the show’s happening.

On his on-camera style.
I didn’t invent anything. I didn’t try to be anybody that I wasn’t. A lot of them do. A lot of them try to do things they’ve seen other people do. I just said, ‘I’m going on, I’m going to be myself. If they like it, fine, if they don’t, next case.’

On how he would like to be remembered.
As a nice guy, who thought a great deal about other people. I love people. As someone who never abused anyone in his family. Who was a good, honest father. One that could be trusted. I never hurt anybody in my life, in the business, intentionally. Just a good guy who likes people.

The video interview is not yet available online, but can be screened at the Archive's headquarters in North Hollywood, CA.