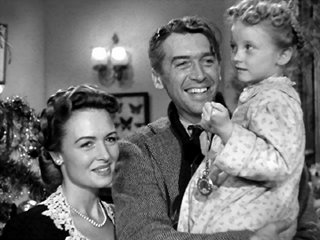 “It’s a Wonderful Life shows that every human being on this earth matters—and that’s a very powerful message.” --Steven Spielberg

What was on the cover of Newsweek for the fledgling periodical's fifteen-cent December 30, 1946 issue? Answer: The cast of It's a Wonderful Life. Here we are, exactly sixty years later, and the Frank Capra motion picture--which was never intended to be a holiday movie at all--is being celebrated with more homespun enthusiasm than ever. Commercials feature clips from the film, George Bailey ornaments dangle on Christmas trees in homes across America. DVD's are stocked to sell. It has become a classic in the truest sense, even a family tradition in American homes from one coast to the other.

Television is the medium which made this movie a classic. When It's a Wonderful Life was first released during Christmas week of 1946 (primarily to make the deadline for Academy Award consideration), it merely broke even on its near $3 million budget. American critics heralded the film while British found it to be bloody awful. The film sank into relative obscurity and due to a clerical error, its copyright lapsed into public domain in 1973. Independent television stations across the nation took well advantage of this and began running it, and running it, over and over again during the holidays. Videotape distributors released it in any number of versions for home consumption in the 1980s...including a colorized version which infuriated director Frank Capra who felt it was "splattered with Easter egg colors." Fans were treated to an ultra-dose of this angelic tale of triumph, and a super classic was born. Capra, who died in 1991, was as surprised at its rebirth as anyone.

In the mid 1990s, Republic Pictures, who alleged ownership, set out to lasso this old warhorse back into their stable and found a way to do it by renewing the rights to the copyrighted music score for the film. It was a knot in the legal lasso which worked. NBC has since held exclusive network broadcast rights for the film.... stretching the two-hour movie into three hours with many commercial breaks.

Oddly, NBC decided to pass on a 60th Anniversary television special or commemoration for its powerhouse movie -- a TV flick that carries enough stock, enough emotional viewer support, to broadcast it twice each holiday season for the past ten years. The Wizard of Oz, and Gone With the Wind in their best ratings days, never received that kind of network reverence. The network was even approached early this year by producer Bob Anderson (who portrayed Young George Bailey in the movie) about a nostalgic special for this year's 60th anniversary broadcast.

But others in Hollywood say "Hee Haw!" and extolled the film with a fitting tribute. The motion picture was named the "most inspirational film of all time" this year by the American Film Institute.

It's a Wonderful Life airs December 24th on NBC.

--Stephen Cox is the author It's a Wonderful Life: A Memory Book (Cumberland House Publishing)