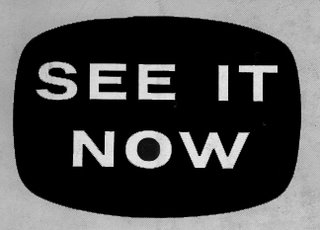 Murrow provided the first expose of the hysteria surrounding McCarthyism with his 1954 See It Now broadcast "A Report on Senator Joseph R. McCarthy," which weakened McCarthy's credibility by offering film clips of his own misstatements and half-truths. McCarthy recieved equal time on See It Now, only damaging himself further. In a related press conference at the time, Murrow said: "Who has helped the Communist cause and who has served his country better, Senator McCarthy or I? I would like to be remembered by the answer to that question."

This is Part 3 of Joseph Wershba's Archive of American Television Interview. Click here to access all interview segments. (Remember, if you'd like to watch the interview in the order in which it was conducted, select the parts in order (1,2,3...). In his 12-part interview Wershba talks about working with Fred Friendly and Edward R. Murrow on See it Now, producing for CBS Reports, and segment producing 60 Minutes for over 20 years.

As Wershba recounts in the segment:

"The right of reply was the key thing in the McCarthy broadcast. I know [Murrow] anguished over what right do I have to use this tremendous engine, engine of communication to go against one man. That bothered the hell out of him. What right did he have to do that? And he kept looking for a way. "Isn’t there another way that we can do this broadcast?" I think he solved it in his own mind. I never heard him say it directly but I think he solved it by recognizing that Senator McCarthy had enough weaponry at his command that he didn’t have to worry about Edward R. Murrow taking him on."

As Lerner Bonsignori recounts in her interview:

"Murrow was the greatest exponent of the Bill of Rights I have ever met. Everything we did, had to do with the rights of the individual under our constitution. And every show we ever did, if you examine it carefully, you will find within it, the Bill of Rights. And that was his function. And we were able to do it because we were independent.... We had no executives coming in to that cutting room to in any way see what we were doing. We never screened for them, not once. They wanted to see the show, even [CBS Chairman William S.] Paley, he saw it on the air."

Lerner Bonsignori describes her transition from an editor in feature films to her extensive career in television. She talks about her work as an editor on the CBS documentary series See It Now, Small World, and CBS Reports; and her opinions on and relationship with the co-producers of these series, Edward R. Murrow (who also served as host) and Fred W. Friendly. She describes in detail such benchmark See It Now shows as "The Case Against Milo Radulovich AO589839," "A Report on Senator Joseph R. McCarthy," and "A Conversation with Dr. J. Robert Oppenheimer" and the CBS Reports program "Hunger in America." She discusses her later freelance work, such as that with Charles Kuralt and the two documentaries for which she won Emmy Awards, ...But What About the Children? and CBS Reports: The Defense of the United States: A Call to Arms. She also identifies the changes that have affected the field of editing through the years, such as the advent of videotape. The 3-hour interview was conducted by Michael Rosen on December 11, 1998.