Roger Ebert, Celebrating his 40th Anniversary as a Film Critic, Returns to Action 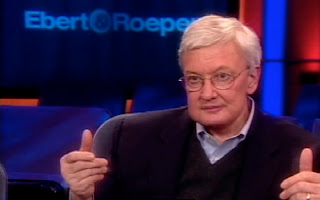 The Archive has now posted its interview with Roger Ebert, conducted in 2005 on the set of Ebert & Roeper in Chicago. Click here to access his entire interview.

Roger Ebert, the first person to win the Pulitizer Prize for Film Criticism, is celebrating his 40th anniversary as film critic for the Chicago Sun-Times.

He is making progress on his health and as stated on his website, he expects to attend his Ninth Annual Overlooked Film Festival which runs today through April 29, if only as an audience member ("friends and colleagues will take onstage Q&A duties").

As Ebert writes in a letter on his website rogerebert.com: "I think of the festival as the first step in my return to action.... I plan to gradually increase my duties in the months to come."

Interview description:
Ebert spoke about his interest in the movies while growing up and his work as a youth, freelance writing on various publications up through his college years. He talked about joining the Chicago Sun-Times in 1966 and being named the paper’s film critic in early 1967, a post that eventually earned him the first Pulitizer Prize given for film criticism. He briefly talked about his early experiences on television before he was teamed with Gene Siskel on the local WTTW movie review series Opening Soon at a Theatre Near You. Ebert noted the many incarnations of the show, which went national on PBS and then was nationally syndicated, becoming the familiar Siskel and Ebert. He talked about working with his longtime colleague and sometime rival Gene Siskel, who co-hosted the show until his death in February 1999. Ebert described the transitional period that followed until Richard Roeper was offered the job “across the aisle” from him on the renamed Ebert and Roeper in July 2000. Ebert talked about various aspects of the series including the thumbs up/ thumbs down grading system, the use of movie clips on the show, and the impact the show has had on the movies. Throughout the interview, Ebert showed his passion for the movies and his respect for them as an art form. The interview was conducted by Gary Rutkowski on November 2, 2005.