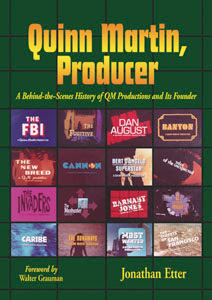 We're always on the lookout for the latest and greatest TV books, recently a 2003 publication we had missed, crossed our desks....

Quinn Martin, Producer: A Behind-the-Scenes History of QM Productions and Its Founder by Jonathan Etter (

ISBN 0-7864-1501-0, 232 pages, $39.95) gives a brief personal history of Quinn Martin (nee Irwin Martin Cohn) (1922-1987) and then provides full chapters on many of his most memorable series including: The Fugitive, The FBI, The Invaders, Dan August, Barnaby Jones, The Untouchables, The Streets of San Francisco, Banyan, Tales of the Unexpected, and Cannon (and a few pilots and movies). The book highlights his specific contributions to the series (In terms of writing, casting and editing), as well as his dealings with the networks and other behind-the-scenes goings-on.

If you're a fan of Martin's many series, you'll enjoy the inside information culled from the interviews Etter did with many of the shows' personnel.