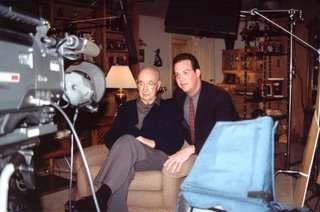 George Balzer (pictured above with interviewer Dan Pasternack), who spent twenty-five years writing for Jack Benny, was interviewed by the Archive of American Television for two hours on January 25, 2001. Balzer died on September 28, at the age of 91.

Here are some excerpts from his Archive of American Television Interview:

On moving to Los Angeles:

[When I was] four, my dad came home one night and said to my mother … our family was eight … eight people, my mother and father and six kids. Came home one day and said we’re going to California. She says “Okay. When?” He says “Now.” And within about four days, he sold the house, sold the car, sold whatever else he had and we were on a train going to California. And we arrived in Los Angeles. That was 1920. And after five years in Los Angeles, we moved to the San Fernando Valley and we resided there until 1937 I believe it was. That’s were I went to grammar school, high school and so forth.

On getting started as a writer:

When I graduated from high school, I joined with my father and the other members of the family’s family in the laundry business. There’s a long history behind that but I was with him in the laundry business along with the others and I was only out of school maybe six months or so when I became ill and was forced to take considerable bed rest and that gave me a chance to listen to a lot of radio. And I never had any idea that radio might be my business but I was interested in it so I pulled away from the laundry and started writing at earnest … I still have the first two scripts I ever wrote and they were both written for Jack Benny. Not on assignment but just for my own enjoyment.

On his sense of humor:

One day, I recall, it was in a history class I think it was or a civics class and when the bell rang for the students to change periods, why the teacher looked right straight down at me and said “George Balzar, don’t you leave this room.” Okay, so I didn’t leave the room. And she says “Come up here.” So, I went up to her desk and she says “What’s wrong with me?” I said “I don’t know what’s wrong with you?” She says “I’m standing up here everyday trying to teach these students and you sit back there with a grin on your face.” She says, “What, is my slip showing? Are my stockings hanging down? What’s wrong?” I said, “There’s nothing wrong with you.” She says “Well I stand up here everyday behind this desk and you’ve got that grin on your face.” Well I said, “It’s nothing.” So, she says “You may go.” So I left. I didn’t know what that meant but as the years went by, I began to realize what was happening. Everything I saw or heard or anything that was said, I saw the lighter side. And most of it made me laugh … to myself. The other people must have thought I was crazy.

On landing a writing job on radio’s “Burns and Allen”:

I had become acquainted with a few of the radio people that used to spend their time at Hollywood and Vine at CBS and NBC and I got to know a few people and they got to know me. And eventually, a break came up and I got it. I had a piece of luck, real luck when a family moved into their new home, which was at the back of our property. So there’s the Balzars house and back-to-back are the Devines. Andy Devine was a player with Jack for about five years. I got to Andy and I said, “Would you do me a favor? Would you look at these scripts and just tell me what you think?” So he did and said “I think they show promise and you should try it if you think you can do it.” So, that’s about the last, for quite a while, that I heard from Andy although he had read other scripts in between there and was always encouraging. And then for maybe a year or two, I didn’t hear anything from anybody and I just continued trying to write, turning samples of my work into agencies and that kind of approach. Suddenly, at one point, I received a call from Andy, a phone call. He says, “Get in touch with Tom Harrington…” So I did and the agency at that time was putting a new show on the air, “Burns and Allen” and they wanted to have me join their staff.

On the relationship between Jack Benny and his writers:

Jack understood us, we understood him. And I remember one Saturday… we were in the conference room at NBC and we’re working on a script. The purpose of this meeting was to punch it up here and there, wherever Jack wanted it. We’re sitting around the table, Jack says “Fellows, I want a [new] joke right here. Page six, a new joke.” And there’s absolute silence. He says right here “Page six, I want something good. It just calls for something to make it so and so and so and so. A new joke.” There was silence. We didn’t respond at all. And after awhile, I leaned over to him and said “Jack, well get you a new joke.” He says, “Oh, you agree with me, huh?” I said “No, but it’s possible that the four of us could be wrong.” He looked at me for a split second and broke into the biggest roar you had ever heard, laughing. Got up off his chair, slid down the wall and sat there at the corner, laughing. And as he got up, he says “I wouldn’t change that joke now for a million dollars.” And he didn’t. We went on the air and it got a big laugh and Jack just looked up at the booth as if to say, “You son of a gun.” And that was it. That was the kind of relationship we had. And he had great faith and trust in his writers.

On working for Jack Benny:

We’d do a show on the air Sunday evening and when that show was over we really didn’t know what we were going to do the next week. But we didn’t let that bother us. On Monday, we took off. On Tuesday, we began to think about the show and would contact one another by phone. Tuesday night, we would call Jack and say we’ve got an idea that might work. We would decide with Jack’s approval what to work on. And he says, “Yeah, sounds kind of funny go ahead and do it.” Then on Wednesday, we would firm up an idea. So, we divide the show up, the four of us and we’d call Jack and say, “Jack, this is what we’re on.” So then Wednesday and Thursday, we’d write both halves of the show. Each half and we’d have it ready to go to Jack on Friday and then we’d sit down with him and we’d get it all cleaned up and ready to go to for a Saturday morning dress rehearsal and then on Sunday, we’d do the broadcast. And once again, we were right where we were a week before. It lasted for I don’t know, twenty-five years or more. And that’s pretty much my career. Kind of dull, I could have been on a lot of shows, I guess. But I was lucky; I’m not ashamed to say so. It was luck. I got myself attached to people that just couldn’t be nicer. And that’s where I spent my entertainment life.

Balzer began by recalling his start in comedy writing, first for Bing Crosby’s “Kraft Music Hall” radio program, and then on the radio show “Burns and Allen,” where he first teamed up with writer Sam Perrin. The duo next worked on “The Jack Benny Program” radio show, and along with writers Milt Josefsberg and John Tackaberry, they transitioned with Benny to his CBS television program. Mr. Balzer discussed the writing process on the Benny show, and talked about some of the more memorable skits and comedy bits. Next, he talked about writing for Lucille Ball’s sitcom "Here’s Lucy." Finally, he discussed his work on "The Red Skelton Show" and "The Don Knotts Show."

What are your favorite skecthes from The Jack Benny Program-- radio or TV?