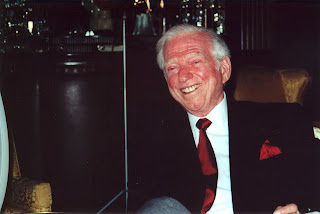 The Archive of American Television interviewed Sidney Sheldon on March 30, 2000.

Interview description:
Sidney Sheldon was interviewed for two-and-a-half hours in Beverly Hills, CA. Sheldon recalled his early years in Hollywood as a screenwriter for feature films, and the success he achieved in that field, culminating in his win of the Academy Award for The Bachelor and the Bobby Soxer. Mr. Sheldon next discussed his creation of The Patty Duke Show, and his fond memories of working with the show’s young star. He recalled how, during his run as writer/producer of Patty Duke, he was approached by Screen Gems to produce another comedy for them, which eventually became I Dream of Jeannie. He talked about how he created the concept for the show, and fondly remembered each of the stars, including Barbara Eden and Larry Hagman and assembling the production staff (including director Hal Cooper). He discussed the effort to hide Eden’s pregnancy in the first season, and how the crew put together the many special effects shots. He also shared his memories of the “navel controversy” that brewed during the time over not revealing Eden’s belly button, and the attempt by the stars of Laugh-In to circumvent that rule. Later, he recalled creating Nancy, the short-lived 1970 sitcom, and Hart to Hart (pilot only), which he produced for Aaron Spelling. Mr. Sheldon next discussed his about-face from television writer to novelist, and shared his delight at the success that he has achieved with the sixteen best-selling books he has written, many of which have been turned into successful television movies.