Fifty years ago today... The Last Original Episode of "The Honeymooners" Aired 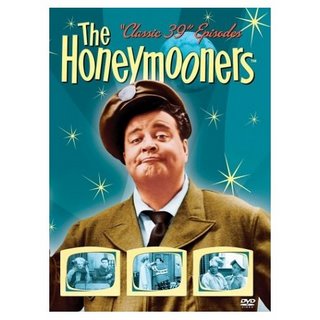 The Honeymooners was a sketch on Jackie Gleason's variety series before and after it ran for a single season as its own half-hour series. The episodes from that season, known to fans as the "Classic 39," ended their run on September 22, 1956.

What is your favorite episode of The Honeymooners' "Classic 39"?

Is it "The Golfer" where Ed tries to teach Ralph how to golf? "A Matter of Life and Death" where Ralph, thinking he's dying, tries to sell his story to a magazine? "Brother Ralph" where Alice gets a job and Ralph does the housework? "The Man From Space" where Ralph creates his own Halloween costume in the hopes of winning the prize at the Raccoon Lodge party? "The $99,000 Answer" where Ralph hopes to take home the big money as an expert on popular songs? "A Dog's Life" where Ralph accidentally gives dog food to his boss trying to sell him on a new mystery appetizer? "Trapped" where Ralph witnesses a a bank robbery and the thieves are on his trail? or is it another one of the "Classic 39"?