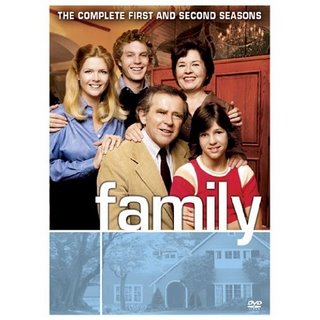 The first and second seasons of the Emmy-Award winning series Family (1976-80) has now been released on DVD.

The series was executive-produced by Leonard Goldberg, Mike Nichols, and Aaron Spelling. Here are some sound bites from Goldberg and Spelling’s interviews with the Archive of American Television where they discuss Family.

[Family] was the first family show on television. It’s a husband and wife raising their children and everyday things that happen in their life. It’s just everyday life. Not huge things. It had that.

Aaron and I were standing in his kitchen. And we got to talking about new ideas for shows. And we came up with two ideas. So far apart— perhaps illustrating our partnership. One was about a chopper, called Chopper One. And the other was Family. And I told Aaron that night the story of my Dad, about the little moments, we talked about…. We had dinner with Jay [Presson Allen]… and she wrote the script. It was a great script. And Barry Diller came over to see me…. And he said I came over to talk to you about Family. We’re not gonna do it. I said, Barry, why? He said because it’s so good and I know your heart is in this and you’ll make a great pilot and then we’ll break your heart… because it’ll never go on the air, it’s too soft…. I can’t let them do that to you…. Then what happened was Jay lived nearby to Mike Nichols. And ABC had made a deal with Mike Nichols. And they couldn’t find anything that he wanted to do. He read Jay’s script…. and called ABC and said I’ll do [Family]…. Eisner calls me and goes, Mike Nichols wants to do Family so we want to do it. I said you son of a gun. Aaron and I want to do it, that’s not good enough, with everything we’ve done for you? But because Mike Nichols wants it… ! He said, are you finished? Will you just please call… Mike, and make a deal with the two of you. And, let’s go. And that’s how Family got made as a pilot and then picked up as a series.