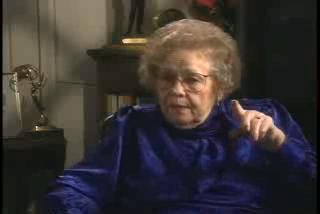 Elma "Pem" Farnsworth, the widow of Philo Farnsworth, has died at the age of 98. She was one of the first honorees interviewed by the Archive of American Television.

Elma Farnsworth was interviewed for seven hours in Salt Lake City, UT. Farnsworth discussed at length Philo's first television invention - the Image Dissector Tube - and the excitement of seeing its first moving image. While Philo toiled to create the first electronic television, RCA and Vladimir Zworykin worked on a similar invention, both trying to finish before the other. Farnsworth talked about the heated competition and the ensuing patent fights between Philo and General David Sarnoff, then President of RCA. The interview was conducted by Jeff Kisseloff on June 25, 1996.