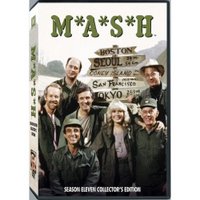 Today sees the final season of M*A*S*H released on DVD. The M*A*S*H finale was the highest rated single program ever when it aired on February 28, 1983.

Dr. Walter Dishell was the medical advisor on the entire run of M*A*S*H. This is tape 4 of Dr. Dishell's interview where he discusses each of the ensemble's approach to medicine and talks about co-writing the real-time M*A*S*H episode "Life Time" with Alan Alda.

Dr. Dishell began by describing how he first got involved in television when he was approached (while a resident at UCLA medical center) to become the medical advisor for a television movie called U.M.C., which severed as the pilot for the long-running drama series Medical Center. Dr. Dishell talked about his work as the medical advisor to this series and the various medical subjects it explored including an episode that led to a change in real-life laws regarding employment discrimination of recovered cancer patients. Dishell talked about his continued work as a medical advisor on various television series while he maintained a full-time private practice. He detailed his work on M*A*S*H including advice he gave regarding medical procedures as they were in the 1950s during the Korean War. He described the episode he co-wrote with star Alan Alda (“Life Time”) that unfolds in real time and centers on an arterial graft operation. Dishell talked about several other television series in which he was associated as a medical advisor and writer, including: Trapper John, M.D., House Calls, and Family Medical Center.

What are your memories of the M*A*S*H finale?