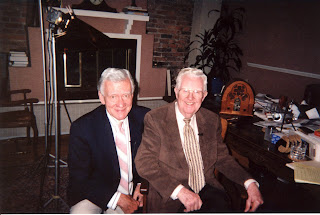 Quinlan was interviewed by the Archive of American Television on July 20, 1999.

Sterling “Red” Quinlan was interviewed for nearly three hours in Chicago, IL. He discussed how his career began in 1947 at WBKB in Chicago where he eventually worked his way up to the title of station manager. During that time he participated in the rise of the “Chicago School” of television. During the interview he recounted his relationships with Burr Tillstrom, Studs Terkel and Dave Garroway. Until he left WBKB in 1965, he was considered the most independent station manager in the country. He went on to consult for WTTW, Chicago’s public television station and is currently working with DG Systems in Chicago.

The interview can be viewed at the Television Academy headquarters in North Hollywood, CA. Sterling "Red" Quinlan was also featured as an interviewee in Jeff Kisseloff's The Box: An Oral History of Television 1920-61.