Tom Poston, who was a regular on The Steve Allen Show,
Mork & Mindy, and Newhart, has died at the age of 85. 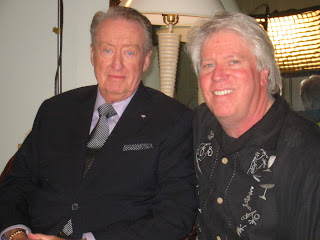 Poston was interviewed by the Archive of American Television on
February 2006 (pictured here with interviewer Stephen J. Abramson).
His entire two-hour interview (part 2 of 4 can be seen below)
can be viewed at the Television Academy offices in North Hollywood.

In the clip above (part 2 of 4), Tom Poston discusses how he became a regular on The Steve Allen Show. PRESS THE PLAY ARROW IN THE PLAYER ABOVE TO VIEW THE SEGMENT.

Interview Description:
Tom Poston talked about his first television appearances, including his stint as a regular on the early soap opera, Hawkins Falls, Population 6200, which originated in Chicago. He chronicled his work on a local New York daytime show, that led to appearances as a regular on The Steve Allen Show where he memorably appeared in the “Man on the Street” sketches with Don Knotts and Louis Nye. He discussed his work with colleague Bob Newhart – including his recurring role on The Bob Newhart Show, and his regular role as handyman “George Utley” on Newhart. Other topics he discussed include his original consideration for the lead of Get Smart (before the project changed networks nullifying his contract), his regular role on Mork & Mindy, and his relationship and marriage to actress Suzanne Pleshette. The interview was conducted by Stephen J. Abramson