Peter Boyle, who played Ray's Dad on Everybody Loves Raymond (and voice to the show's only catchphrase— "Holy crap!") has died at the age of 71. Boyle was also beloved for his role as the Monster in Mel Brooks' film Young Frankenstein. His other notable performances included the bigoted Joe and an Emmy-winning guest-starring role on The X-Files. 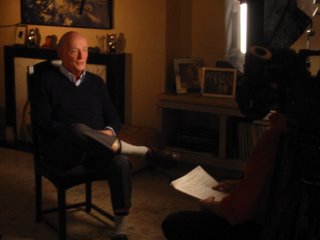 The Archive of American Television interviewed Boyle for one-and-a-half hours on November 8, 2005. Here are some soundbites from the interview:

On his first career break.
After going through a period of starvation and rejection for a couple of years, I did a few off-Broadway shows and then I got cast in the road company in a big hit play called, “The Odd Couple.” I played Murray, the cop and I understudied the Oscar.

On Young Frankenstein.
I had a big-time agent, named Mike Medavoy, who said to me, “I handle Gene Wilder and Marty Feldman and want to put the three of you guys together in a movie.” We had a conference call, and Gene said “I’ve been working on an idea of Young Frankenstein, a Frankenstein movie.” He went to Mel Brooks, whom Gene Wilder knew very well, and got him involved in directing it. I played a loving, tender, sweetheart of a guy. Just misunderstood.

On being cast on Everybody Loves Raymond.
I was out in California and my wife and my daughters were with me because it was Spring break from their school in New York. I got a call to come and meet with producer Phil Rosenthal and Ray Romano. We had to meet at Universal Studios and I drove over and took my whole family with me. My wife, my two daughters, Lucy and Amy and their friend. We had trouble getting on the studio lot, they didn’t have the proper information, then we had to find a parking place and we had to go find where the audition was and then when we got there, it had been changed. My wife kept saying to me, “do you know where you’re going?” Which of course I didn’t. So I walked in, and Phil Rosenthal came out and I said, “well you changed the place, blah, blah!” I barked at him. And I got the job because I was in character.

On Ray Romano’s “real” family and playing the role of his father.
During the first years, when were struggling an unknown and everything, Raymond’s real family showed up on the set and there was his mother and his father and his brother the policeman and his other brother. Basically, it was us. It was amazing, just to see that. I spoke with his father, but I didn’t want to get too close with his father because I didn’t want to be tied into. Basically I took my character from Raymond’s eyes. Because Raymond would make eye contact on stage, which is a good quality for me and if I would try to come closer to try and hug him, he would freeze. Then I knew I was in the right territory. It confirmed, it confirmed to me what I as doing was right.

On the legacy of Everybody Loves Raymond.
I think it’ll be proof that basically ah, if you portray family life truthfully and you show that people can stick together even though they drive each other nuts, that there’s a lot of power to family life. I think it just reminds of people again of their childhood of brothers and sisters and fathers and mothers.

On Monster’s Ball.
That was a film I hesitated to do because the character was such a bigot. Then I decided to do it and I actually had a good time, and I was very pleased with the way it came out. It was a good part, it was a good script and I liked the director, Marc Forster.

Interview description:
Boyle reminisced about growing up in Philadelphia, where his father performed on local children’s television shows. He described the brief tenure he spent as a monk, before embarking on his acting studies with Uta Hagen. He outlined his early career in improv and in films including Joe and Young Frankenstein. He then discussed acting in the television movie Tail Gunner Joe as well as his acclaimed work on the series NYPD Blue and The X-Files. He then went into detail about his work on the long-running sitcom Everybody Loves Raymond. He described the audition experience, his character of “Frank Barone,” his co-stars, and various key episodes of the series. The interview was conducted by Allan Neuwirth.

The entire interview can be viewed at Academy Headquarters in North Hollywood.