A New Book by the Author of "The Box" 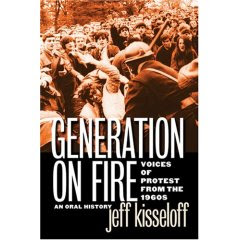 Anyone interested in the history of television, has undoubtedly come across the book, The Box: An Oral History of Television, 1929-1961 by Jeff Kisseloff, published in 1995 (Penguin Books). For the book, Jeff interviewed over 300 individuals involved in all aspects of early television -- the audiotaped collection of interviews now resides at the Archive of American Television. What most people don't know, is how instrumental Jeff was in the early days of the Archive, particularly in guiding us to the still-living early pioneers of the medium and interviewing television luminaries Elma Farnsworth, Joseph Wershba, Dick Smith and others for the Archive.

Recently, Jeff focused his oral history talents on another topic, the political and cultural upheaval of the 1960s, in his new book Generation on Fire: Voices of Protest from the 1960s An Oral History. In it, he interviews those who pushed for change in the tumultuous decade filled with such issues the quest for Civil Rights, free speech, communal movements, the Vietnam War, and the National Guard shootings at Kent State University. For anyone who wants to know more about the 1960s, the power of individuals to instigate change, or who wants to experience the work of a master oral historian, Jeff's book should be at the top of the list.