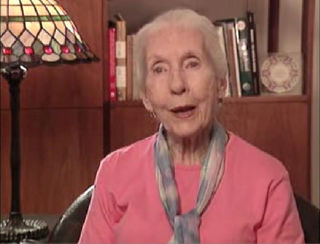 Frances Buss Buch worked at CBS at this time and describes hearing the news and how CBS reported it on television. Her reminiscenes can be found at 23 minutes into Part 1 of her interview.

Frances Buss Buch was the first woman director to work at CBS television.

Watch her entire five-part interview here. In order to watch the interview in order, click on each sucessive part: 1, 2, 3...

Frances Buss Buch was interviewed for over two hours in Hendersonville, NC. She described how a two-week summer job at CBS led to an over decade-long association with the network, and her historic role as CBS’ very first female director. She detailed her work at CBS before and after broadcasting was interrupted during World War II. She talked about her assistance creating maps for the news program on December 7, 1941, when the Japanese attacked Pearl Harbor. She described several of the earliest commercial broadcasts on CBS which featured her on-camera, including The Country Dance, a monthly dance program by the American Country Dance Society; Children’s Story, in which a story was read to a child, “illustrated” by an artist on camera; and the CBS Television Quiz, which featured such games as “Peanuts in the Bottle” in which a contestant attempted to spoon peanuts into an empty milk bottle that they held on their head. She talked about some of her earliest directorial efforts such as Sorry Wrong Number, an adaptation of the famed radio show. Buch talked about several of the key creative talent at CBS at the time including Worthington Miner and Gilbert Seldes. She spoke in great detail about other early CBS series including The Missus Goes A-Shopping, To the Queen’s Taste with Dione Lucas, The Whistling Wizard, and Mike and Buff. She also talked about CBS’ color experimentation and her role as the director of the first color broadcast for the network on June 25, 1951. She also discussed "Telecolor Clinics," a series of television documentaries done for the American Cancer Society. The interview was conducted by Karen Herman on June 16, 2005.