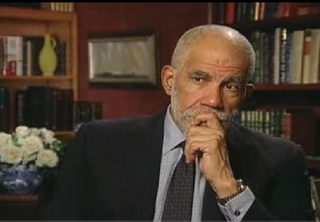 Archive of American Television Interviewee Ed Bradley has died at age 65. Bradley was interviewed in two sessions on May 12, 2000 and May 8, 2001.

Bradley on his career choice (from tape 2):

I’ve written poetry since I was in elementary school but it didn’t go anywhere. I mean, I’m not a poet. Just something I’ve dabbled in. I thought I was going to Paris to write the great American novel but you know that didn’t happen either. I started the book and realized I didn’t have a clue about what I was doing. I remember writing a scene one day in our apartment and this woman was standing in the doorway and she said something and it just struck me. I said oh, this is great. And I went into my room and closed the door and I sat down at the typewriter, put that paper in and I just described that scene and what she said and it was really wonderful and then I said, 'Now what?' I mean I had no idea. There was no plot. There were no characters. It was just this one scene and I realized that what I was good at was a reporter describing a scene and what had taken place.

Ed Bradley was interviewed for nearly four hours (in two sessions) in New York, NY. Bradley discussed his early career in radio in the 1960s, covering such events as the Civil Rights Movement. He talked about his first association with CBS, as a stringer while in Paris in the early 1970s. He described his work as a correspondent in Cambodia and Vietnam in the early to mid-70s. He talked about his work as an anchor on the CBS Sunday News (1976-81) and as a producer for CBS Reports (1978-81). He then discussed the series for which he is most associated, the CBS news magazine program 60 Minutes, where he first started in 1981.