On November 30, 1956 at 6:15 pm Pacific Standard Time, a milestone in the history of broadcasting occurred: the debut of videotape. In Hollywood, CBS Television recorded and reproduced, on the new Ampex Videotape Recorder, a Douglas Edwards news broadcast in New York which was rebroadcast and seen by thousands of viewers along the Pacific West Coast, from Los Angeles up to the northern tip of Washington. The program was taped from a live New York telecast to achieve a two-hour delay and then broadcast to TV audiences in twelve western cities. 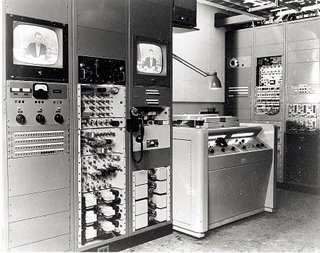 Videotape, a brand new medium, assured a record and playback of what was live television (or kinescope), but now in nearly miracle time. The new Ampex VRX-1000 Videotape Recorder--a complex gargantuan machine about the size of a wall--was installed at CBS Television City in Hollywood and utilized large two-inch format magnetic videotape. Live television broadcasts were now made possible, where kinescopes (filmed TV screens) once served as the delayed medium which to serve up shows. In fact, many television shows which originated in Hollywood as live programs were never seen "live" by West Coast viewers. Shows starring Jack Benny and Red Skelton, for instance, were presented around 4 or 5 pm in Hollywood, live for suitable prime-time air on the East Coast. West Coast viewers watched what was called a "hot kinny" (very fresh kinescope version).

CBS installed two Ampex machines and began recording news broadcasts on both for protection. The team of engineers who designed the practical videotape recorder included Charlie Ginsberg, Ray Dolby, Alex Maxey, Fred Pfost, Shelby Henderson, and Charles Anderson. These innovative visionaries were recognized by the National Television Academy in September 2005 for their achievement.

Without a doubt, video technology altered the world and the way we view it. The technology enabled was a fundamental shift in modern technology and changed the br 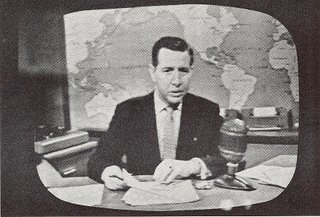 oadcasting world dramatically, if not instantly, providing choice, accessibility, as well diversity in television. Videotape changed the world in untold ways. Today, 50 years later, hundreds of millions of home-users have this miracle medium to thank for precious preserved personal memories. Not to mention endless bloopers and "live" antics caught because of this invention. Videotape has permeated literally every aspect of our lives, all the while educating, enlightening, witnessing, proving and disproving. It is the invention which has brought our society closer in a moment's glance. Now, with the digital age upon us, the video medium is bowing, a noticeable waning in its home-use, however it is still used widely within broadcasting and news media levels.

Guest Archive blogger Steve Cox is author of more than 15 books on pop culture, film, and television. He has contributed to TV Guide, The Hollywood Reporter, and LA Times. His most recent book is "The Munsters: A Trip Down Mockingbird Lane" (Waston-Guptill/ Backstage Books)

Lower right: The actual first video recording of "Douglas Edwards With the News" on CBS, November 30, 1956 at 6:15 pm. (courtesy of Steve Cox)