Students: Be All That You Can TV! 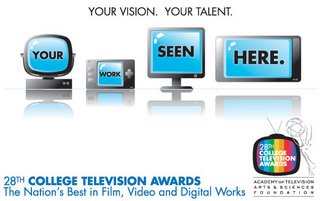 Although we usually highlight things from television's past, we thought we'd pass on this terrific opportunity for television's future....

Each year, hundreds of students from all across the nation enter the Academy of Television Arts & Sciences Foundation's College Television Awards competition. If someone you know is in a degree program at a small community college or a large university, this is an opportunity to make their film, video or digital work known to the television community nationwide.

No Entry Fee.
Cash Awards.
Awards are presented at the Annual Awards Gala in March.

The 28th Annual College Television Awards is now accepting submissions from eligible student producers in a variety of categories. For more information, click below: