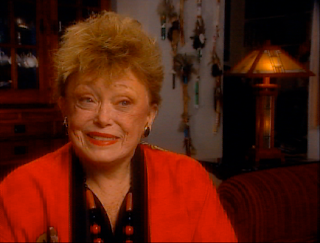 Rue McClanahan's forty year TV career began with a regular role on soap opera Another World and guest roles on such series as All in the Family and Mannix. She's best known for her work on the series Maude, Mama's Family, and The Golden Girls. She won the Emmy Award in 1987 for Outstanding Lead Actress in a Comedy Series for her role as "Blanche Devereaux" on The Golden Girls.

Interview Description:
Rue McClanahan was interviewed for two-and-a-half hours in New York, NY. McClanahan talked about her acting start on the stage and touched on some of her feature films from the 1960s. She discussed her first regular role in television as scheming nurse “Caroline Johnson” on Another World. She recalled how, when her character tries unsuccessfully to poison the mother of the twins she is caring for, she received a fan letter recommending a better poison. She spoke in great detail about her role as “Vivian Cavender” best friend to Bea Arthur on the television sitcom Maude. She described her character, talked about working with the ensemble cast, and commented on memorable series episodes. She then talked about her work as series regular “Aunt Fran” on Mama’s Family. Lastly, she discussed at length the production of the classic 1980s sitcom The Golden Girls and her role of “Blanche Devereaux.” She talked about the casting process, working with the series production personnel, and the transition of the show into The Golden Palace. The interview was conducted by Jim Colucci.

In this excerpt from her interview, she discusses how different The Golden Girls actresses were from their characters: