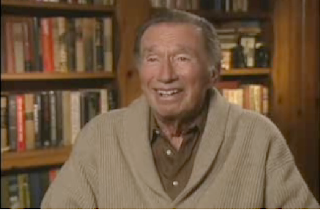 Some interview excerpts are as follows:

On Kate Smith (from part 3):
Kate Smith was a wonderful, remarkable talent. She was a great performer for the theater. When they were traveling she would cut the boys’ hair— she was a barber as well. But I remember the transition. The show became enormously popular. But I remember the girl who cut hair…. Every Friday show, she would sing “God Bless America.” And I’ve probably heard it more than any other person I know has heard it. She had this great voice— big belting voice. And when she sang she filled a room, she filled a hall, she filled anything. She was the one who was always recognized with “God Bless America.” …. In those days, if she walked down the street, they followed her. And she was no beauty. She was not a Marilyn Monroe. But she was Kate Smith. And that meant a great deal.

On the Blacklist (from part 3):
The ad agency would say, the cheese company, or the car company doesn’t want to be in the position of pushing Communism in any shape, manner, or form. They’re out here buying entertainment and we don’t want that. And I could understand their perspective but I wasn’t sympathetic to it…. Who cared if they were a Communist when they were sixteen? It never made much sense…. It literally kept people from functioning, from earning a living…. I found it an abhorrent thing.

On Wide Wide World (from part 4):
I was the first one to do a show in which we linked four countries together— Canada, Mexico, Cuba, and the United States. It was Christmas and we sang “Adeste Fidelis.”…. I had a DC-10, a plane, between Miami and Havana, circling overhead relaying the signal, because that’s what was needed. …. I gave [the Emmy the show won] to the technical supervisor who was responsible for it.

On working with President Herbert Hoover (from part 4):
[NBC President] Pat Weaver called me and said I want you to do [a certain series]. I said I never heard of [that] series. He said that’s why I want you on board— jazz it up a little bit. I said "who’s the guest?" He said Herbert Hoover. I said, "Jazz him up?!".... But I got Hoover to laugh on camera, I got him to tell stories about himself… This is a man that never smiled on camera. I got him to tell the story about the little girl at Mark Hopkins who came over to him and said, "Mr. Hoover, may I have twelve of your autographs?" And he said, “Twelve? Why do you need twelve?" "Because twelve of yours is worth one Willie Mays." To get him to tell that story on himself on camera was I felt an accomplishment.

On Maurice Chevalier’s interview for Person to Person (from part 5):
Chevalier had not been permitted to visit this country. He had performed before the German officers. The truth was [he had been given an ultimatum]— “Mr. Chevalier you want to appear before the Frenchmen that we’ve captured, you’ve got to appear before a German camp.” So they gave him that, and he appeared before the Germans, so he could appear before the French. Now we were holding up his visa. He’s a famous French entertainer and we weren’t permitting him to come in. This was during the McCarthy time. I hope that by the story being explained when I did it on Person to Person, it helped, because he was permitted to attend the Academy Awards the following year. [In 1959, producing Person to Person abroad] I informed New York that I was gonna do an entire half-hour [on Chevalier]. They said no. The only ones that ever took a half-hour were Kennedy and Nixon. You’re not gonna take a half-hour— it would break precedent. Why are you taking a half-an-hour? I said because I can’t tell the story in just fifteen minutes. I had visited Chevalier where he had a home. And as I walked up the steps he had a photograph of every woman he had ever been with, all these major stars going on up, ending up with a shrine to his mother that he had outside his bed. And I knew there was no way I was gonna get to any of this without a half-hour at least! He was extraordinary, he was very funny, and it was a delightful half-hour. So what I did is, I shot a half-hour. There was no room for a commercial break in the middle. CBS, when they got the material, was stuck with what I sent them…. There was no commercial break in the middle, they had to give me the whole half-hour— if the man is walking up a staircase you can’t cut away.

Interview description:
Alan Neuman talked about joining NBC as a page in 1947 and his rise through the ranks as stage manager and then director. He described the studios at Rockefeller Center and the early camerawork on such series as Kraft Television Theater. He recalled directing NBC’s first televised presidential election coverage in 1948, anchored by Ben Grauer, which lasted so long that he had Grauer doing calisthenics on the air. He talked about serving as director on such early series as The Three Flames, Mary Kay and Johnny, and Broadway Open House (the forerunner to the Tonight Show). He spoke in detail about his work with Kate Smith and her manager Ted Collins on The Kate Smith Hour. Neuman discussed his work as a producer/director on programs that featured several Presidents of the United States, including Presidents Hoover, Eisenhower, and Kennedy. He talked about the first color remote broadcast done by NBC, for Matinee Theater. He spoke in detail about the series Wide Wide World and Person to Person, for which he served as a producer. Additionally, he talked about the era of the Hollywood Blacklist. B-roll consisted of several photos of Neuman with the presidents he worked with and a photo from the premiere episode of Adlai Stevenson Presents. The interview was conducted by Gary Rutkowski on February 15, 2006.