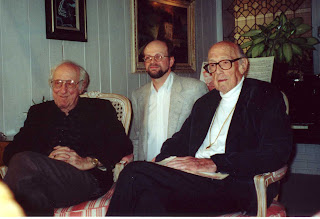 Ray Evans, who co-wrote such popular television theme songs as "Mister Ed" and who won an Oscar for the song "Buttons and Bows" has died at the age of 92.

The Archive of American Television interviewed both Evans and his late partner Jay Livingston (1915-2001) on February 8, 2000. Their interview can be viewed at Television Academy Headquarters.

Interview description:
Ray Evans and his partner Jay Livingston were interviewed for nearly an hour-and-a-half by Jon Burlingame in Los Angeles, CA. They discussed the genesis of their 60-year partnership, and how they came to Hollywood to write songs for the movies. The duo recalled signing a contract at Paramount Pictures, and the many projects that followed. Mr. Burlingame encouraged them to discuss their Oscar nominated and winning tunes, including “Buttons and Bows,” “Mona Lisa,” “Que Sera, Sera” and “Tammy.” They also humorously recalled writing the now classic Christmas song, “Silver Bells,” for the Bob Hope film “The Lemon Drop Kid.” Later, they discussed at length the title songs they wrote for such television shows as Bonanza, Mr. Ed and The Doris Day Show, and marveled at the lasting popularity of those tunes. They also mentioned their collaboration with composer Henry Mancini, and spoke about the entertainers that they have written for throughout the years, including Bob Hope, Betty Hutton, Dinah Shore, Rosemary Clooney and Debbie Reynolds. The interview was conducted on February 8, 2000.