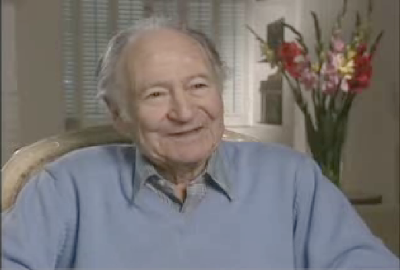 Writer Larry Rhine wrote or co-wrote several of television's most classic sitcom episodes including The Brady Bunch's "The Subject Was Noses," The Odd Couple's "Felix Remarries" (the series finale), and All in the Family's "Archie the Hero." His full interview is now posted online.

Rhine was one of Red Skelton and Bob Hope's writers.

Larry Rhine on writing for Red Skelton (Excerpt from Part 4):

"He didn’t want the writers to be at rehearsal. It bothered him because we’d be shaking our heads. So... I had to poke holes through the backdrop to watch to make sure that the physical things would work because with Skelton you had to have a raised stage with holes in it for flowers to spring up. You had to have a backdrop with water squirting. You had to have wires. We had to make sure that it would work. That’s the only way we could do it but he was a wonderful performer. And his pantomimes were most unusual and when we had the Skelton tribute at the Academy I got warmed up and did a couple of the pantomimes cause we had to do them in order to write them. The pantomimes were like fifteen pages each."

Larry Rhine on writing for Bob Hope (Excerpt from Part 5):

"When you work for Hope you not only do the three of four shows he does, specials during the year, but you’re responsible for everything that he does every day which is open auto shows and beauty contests and schools and appearances on other shows and so forth and Bob doesn’t like to work more than a day ahead of time so what would happen, like right now the phone would ring it would be Bob... and he says I need three pages of chorus girl jokes so what I would do would be excuse myself, go back and write three pages of chorus girl jokes, phone them in to a secretary and go back to what I was doing... He had a very friendly kind of relationship with the writers. He liked nothing more than to come back in the writing headquarters and put his feet up on the desk and chat with you and to this day, after all these years I get Christmas cards every year from him. So he never loses a friend but we had some funny things happen when I was on the Hope show. Bob resented the fact that Saturday Evening Post came out with the story that he was worth $500 million and it demeaned him as one of the fellows and we felt that right away and he said, you know, this is a gross exaggeration. ....So he goes out on stage and says to the audience it’s a gross exaggeration... this article... that says I’m worth five hundred million. He says "maybe three hundred." So when I left him to go on All in the Family I said how much I enjoyed being with him. "I said, too bad that we have to sever relationships, we’ve got so much in common. Neither of us is worth $500 million."

Interview description:
Larry Rhine (1910-2000) was interviewed for four hours in Los Angeles, CA. He spoke of his early years as a writer in radio, which culminated in the position of head-writer of Duffy’s Tavern (1949-50). He spoke of his work as a television staff writer on Private Secretary, Duffy’s Tavern (the TV adaptation), and The Gale Storm Show and his many years (1960-67) working on The Red Skelton Show. He described how he simultaneously worked on the television sitcom Mister Ed and discussed the episodes he wrote with collaborator Lou Derman. He recounted his work with other comics such as Bob Hope and Lucille Ball. He spoke about his freelance work on such series as The Brady Bunch in which he co-wrote the well-known “The Subject Was Noses” episode and The Odd Couple in which he co-wrote the series finale. In great detail, he discussed his work on the Norman Lear series All in the Family and Archie Bunkers Place in which he collaborated with writer Mel Tolkin. The interview was conducted by Gary Rutkowski on February 25, 2000.