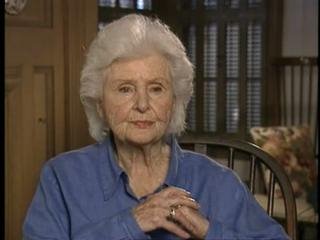 Check out the latest addition to the Archive of American Television's interviews:

Frances Reid was interviewed for one-and-a-half hours in Los Angeles, CA. She talked about her early career working in live television, and her first experiences working on daytime dramas, on programs such as Portia Faces Life and As the World Turns. She described in detail her longtime role as matriarch Alice Horton on the daytime drama Days of Our Lives from its inception to the present day. She discussed her many co-stars throughout the years on the show, notably Macdonald Carey, who portrayed patriarch Tom Horton. Reid explained the production process on a daytime drama, and touched on some of the memorable storylines featured on the show throughout the years. Finally, she briefly described her involvement in the actors union AFTRA, and noted how important it is for her to continue working. The interview was conducted on August 13, 2003 by Jennifer Howard.