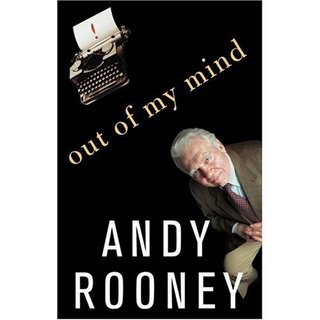 Andy Rooney was interviewed by the Archive of American Television for four hours on his career.

Mr. Rooney has just put out a new book of essays collected in ten themed sections, entitled, "Out of My Mind." The 87-year-old Rooney, according to Booklist, responded to inquiries about when he will retire, "Never. I am never happier than when I am working."

In his Archive of American Television interview, Mr. Rooney spoke about his 50-year career as a writer and producer for television. Rooney detailed his roots as a journalist writing for The Stars and Stripes during World War II. He talked about his entrance into radio and television as a staff writer for Arthur Godfrey and later on television’s The Morning Show with Will Rogers, Jr. and The Seven Lively Arts. He described his shift to the non-fiction form working on such CBS series as The Twentieth Century and Calendar. It was on the later series that Rooney first worked with newsman Harry Reasoner. He spoke in detail about the many CBS documentary specials the two collaborated on (Rooney as writer, Reasoner as narrator) including: An Essay on Doors (1964), A Bird’s Eye View of America (1964), and The Strange Case of the English Language (1968). Rooney talked about several other documentaries in which he contributed as a producer, writer, or a combination of the two including: Sinatra (1965, re-shown on CBS in 1998) and Black History: Lost, Stolen, or Strayed (1968, Emmy winner). He talked about his long association with 60 Minutes, which began in 1968 when he wrote and appeared in (in silhouette) the recurring segment “Digressions,” a tongue-in-check 30-second “debate” on current events. He talked about his temporary break with CBS when the network refused to air an anti-Vietnam War piece An Essay on War, and the subsequent airing of it on PBS’s The Great American Dream Machine. Rooney described several documentaries he made for ABC and CBS in the 1970s including: A Small Town in Iowa, Mr. Rooney Goes to Washington, and Mr. Rooney Goes to Dinner. Rooney spoke of his work writing and appearing in “A Few Minutes With Andy Rooney,” the literate and often cantankerous essays on everyday life that appear as an end-of-the program tag to 60 Minutes, a spot he has occupied since 1978. The interview was conducted by Don Carleton on June 22, 1999.

In tape 7 of Rooney's four-hour Archive of American Television interview, he discusses his association with the legendary newsmagazine 60 Minutes.