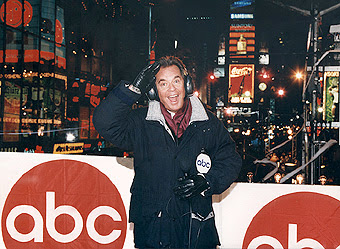 Dick Clark spoke about his first New Year's special in 1959 and his inaguaration of New Year's Rockin' Eve in 1972, when he was interviewed by the Archive of American Television (scroll to 24 minutes into the segment below) on July 29, 1999.

This year, the show expands from one to a record three performances, live from the show's exclusive performance stage on Military Island before almost a million people, and tens of million more viewers at home. Dick Clark and Ryan Seacrest will host three specials from New York, making three and a half hours of special New Year's programming: