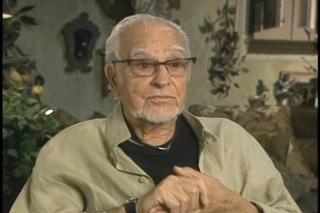 Noel Taylor was interviewed for one-and-a-half hours in West Hollywood, CA. Taylor talked about his early experiences in the theater as an actor and writer before turning his talents to costume designing. He discussed his entrance into television working under NBC contract, primarily on the anthology series "Hallmark Hall of Fame". He talked about several of this series productions including “Hamlet,” “The Green Pastures,” “The Magnificent Yankee,” and “Barefoot in Athens.” He discussed such aspects of the craft as creating a shade of white that could be read on-camera and painting “embroidery” on costumes as a moneysaving technique. He talked about his landmark win of the first Emmy Award ever given for costume design for “The Magnificent Yankee.” He detailed his continued work in television including the 1970s KCET series "The Hollywood Television Theater", which earned him a second Emmy Award. Lastly, he discussed his long association with Katharine Hepburn on all of her later work, including "Mrs. Delafield Wants To Marry". The interview was conducted by Gary Rutkowski on April 19, 2005.