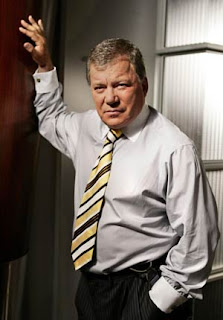 Last night's episode of Boston Legal found William Shatner flashing back to a role he played during television's Golden Age.

"The Defender," shown on the dramatic anthology series Studio One, in two parts on February 25 and March 4, 1957, starred Ralph Bellamy and William Shatner as a father-son legal team who defend a man who Bellamy is convinced is guilty but who Shatner thinks deserves the best defense they can give him. The show was written by one of the period's most acclaimed authors, Reginald Rose, who was also responsible for "Twelve Angry Men." Variety said that the show "struck hard at the emotions with gripping tensity" and was "starkly realistic." 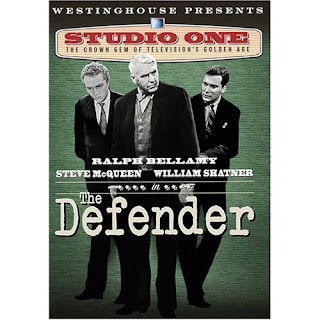 The plot of "The Defender" was grafted onto Boston Legal when a man walks into "Crane, Poole, and Schmidt" with explosives strapped to him demanding a mock re-trial of the case in the office's conference room. The man says that Denny Crane and his father got his mother's killer off with courtroom trickery. The episode employed the black & white kinescope of the "live" Studio One show with a youthful Shatner in one of his earliest television appearances. "Son of the Defender" was written by Phoef Sutton & David E. Kelley and directed by Bill D'Elia.

William Shatner discussed his appearance on Studio One: "The Defender" in his Archive of American Television interview (at 15 minutes in to part 3).

Produced by Herbert Brodkin and directed by Robert Mulligan, "The Defender" was adapted into the critically acclaimed, Emmy-winning series The Defenders (1961-65, CBS), starring E. G. Marshall and a pre-Brady Bunch Robert Reed.

Reginald Rose was interviewed for Jeff Kisseloff's authoritative oral history The Box: An Oral History of Television 1920-61 and was profiled in the October 2002 issue of Emmy Magazine.