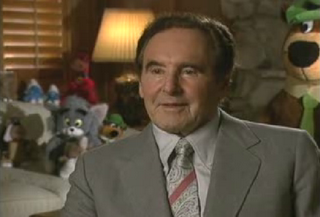 Academy of Television Arts & Sciences Hall of Fame Honoree and Archive Interviewee Joseph Barbera has died at the age of 95. Barbera was interviewed by Leonard Maltin for the Archive in 1997.

Joseph Barbera discussed his start as a young animator at the Van Beuren Studios in New York, before his move to California and MGM's cartoon studio. He recalled working for executive Fred Quimby, and his eventual partnership with William Hanna at MGM. This collaboration with Hanna ultimately led to their own cartoon production company, and Barbera shared many stories about the creation of some of their more memorable characters and shows including: Tom and Jerry, Quick Draw McGraw, Yogi Bear, The Flintstones, Top Cat, The Jetsons, and The Smurfs.